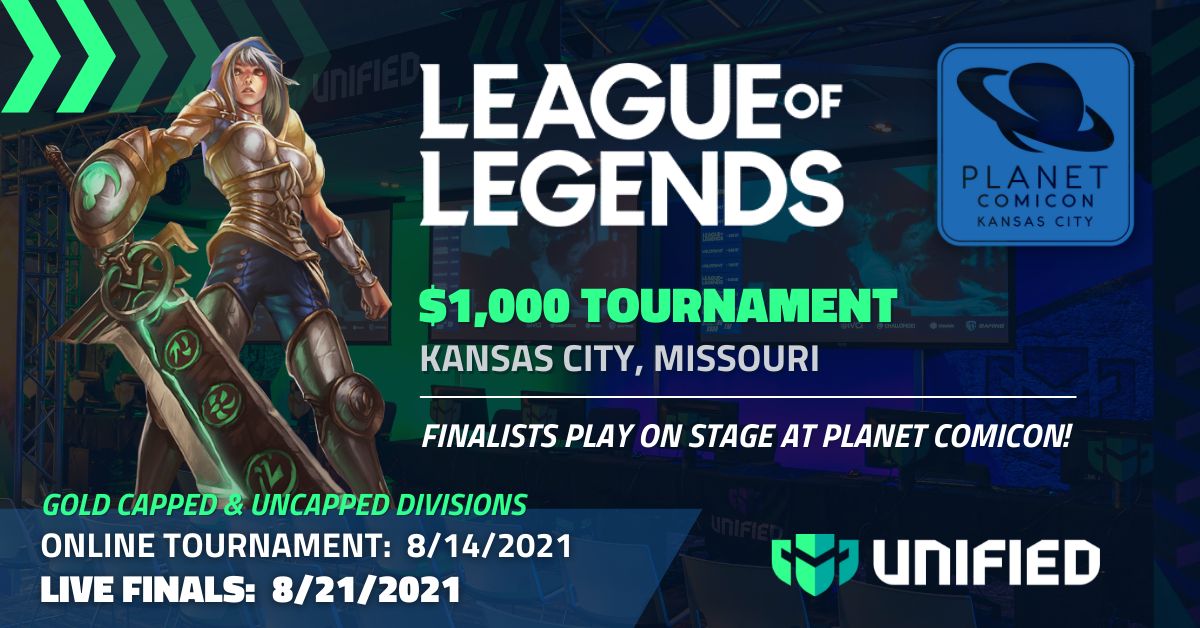 Aspiring League of Legends teams are invited to compete in a two-division online tournament hosted the week before Kansas City’s “Planet Comicon” event, with finalist teams from both divisions earning a spot on the esports main stage to battle for the $1,000 prize pool.

Solo queue players are invited to join the Discord to find a team prior to the registration cutoff of 8/13. Find players in both divisions, including the Gold Capped league for newer teams or people hoping to get a start in competitive esports, as well as the Uncapped Divisions which invites players of all skill levels to prove their merit on the rift. Planet Comicon is KC’s largest and longest running pop culture event, with normal attendance faring upward of 50,000-60,000. Featuring incredible celebrity appearances from across all entertainment industries (including gaming, anime, comics, and more), Unified is proud to be returning as the official Esports provider of the event. We'll be invading the entire gaming arena in the basement, and bringing main stage excitement to the Exhibit Hall with hundreds of vendors, guests, and displays next to the heart of the convention.

Join us for dozens of tournaments, thousands of dollars in cash and prizes on the line between competitive mainstays such as Smash (with a $1,500 prize pool), or our $500 prize pool fighting game lineup with classics like Mortal Kombat and Street Fighter, or newly released titles such as Guilty Gear -Strive-.

Interested participants need a Planet Comicon badge to enter the venue, and must have an esports pass or pass upgrade to compete in tournaments. Ticket holders of any standard Planet Comicon admission are allowed to upgrade their pass on-site to compete in the tournaments or gaming challenges that payout in cash or prizes. For gamers that have yet to purchase Planet Comicon admission, discounted Admission + Gamer packages are available through Unified. Single day passes and upgrades are available!

Skip the line! Unified Esports Pass holders get special entrance and a separate check-in area. Get ahead of the crowd and have more time to get your game on during our “Battle for the Planet” multi-day event this August 20th-22nd in KC!